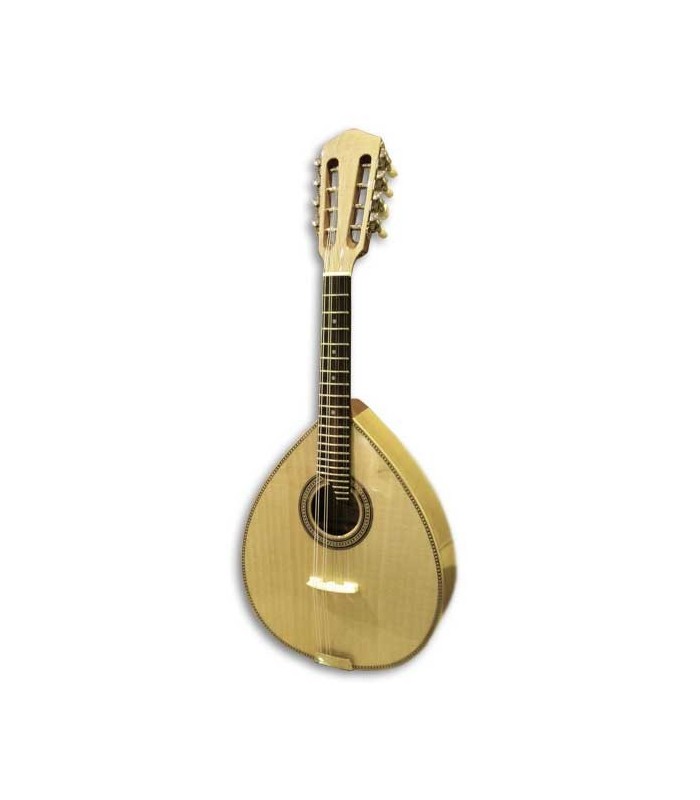 The Portuguese mandolin is a result of the evolution from the original instrument with Italian origin. It can be distinguished from all other mandolins by the harmonic box format, which is
shaped like a pear and back almost flat. It is used especially in Portuguese folklore and academic tunas. The model 40040 manufactured by Artimúsica comes with a standard machine head and solid linden top.

The Artimúsica 40040 mandolin is a model with carillon and topped with solid linden, ideal for those who play Portuguese folk  music and academic tunas.

The Portuguese mandolin resulted from the evolution of the original instrument of Italian origin, which in turn descended from the lute. The mandolin emerges in its modern form in the romantic period, around 1830, with the introduction of strings and metal pegs, which allowed for a more perfect tuning. The Portuguese version is distinguished mainly from other mandolins by the shape of the harmonic box, which has a pear shape and almost flat bottom.

It was an instrument both popular and luxurious, traditionally played by ladies from high society, but it was transversal to the whole Portuguese society, falling into disuse throughout the twentieth century, but being recovered by musicians who wanted to revive the Portuguese musical tradition and, in particular, as an integral part of academic tunas.

The mandolin is a chordophone, with strings of 4 double strings, tuned from the sharpest to the most severe in E - A - D - G, a tuning identical to the violin. Some mandolin models have fan-shaped tuners but the Artimúsica 40040 has nickel-plated tuning machines for durability.

The Artimúsica used several woods to make this mandolin, chosen and treated so that it has a greater longevity and a superior sound quality. The bottom and the sides are in walnut or cherry, and the top in solid linden. The arm is in mahogany and the scale is in panga panga (Millettia laurentii), a wood originating in Mozambique, of high hardness, resistant and aesthetically appealing.

Founded in September of 1992, Artimúsica is one of the reference brands in the traditional construction of traditional Portuguese instruments. It is a family business, which follows the method of construction started by master Joaquim José Machado, more than 100 years ago. His grandchildren, the masters Manuel Carvalho and José Carvalho, make each instrument as if it were a true work of art, making each piece unique and high quality.

The Artimúsica 40040 is an excellent instrument at an affordable price, perfect for those who like to play traditional Portuguese music or add trills and melodies to the tuna serenades, and perpetuate the Portuguese national musical legacy with the manufacturing quality of one of the largest companies of Portuguese traditional instruments.

8 other products in the same category: