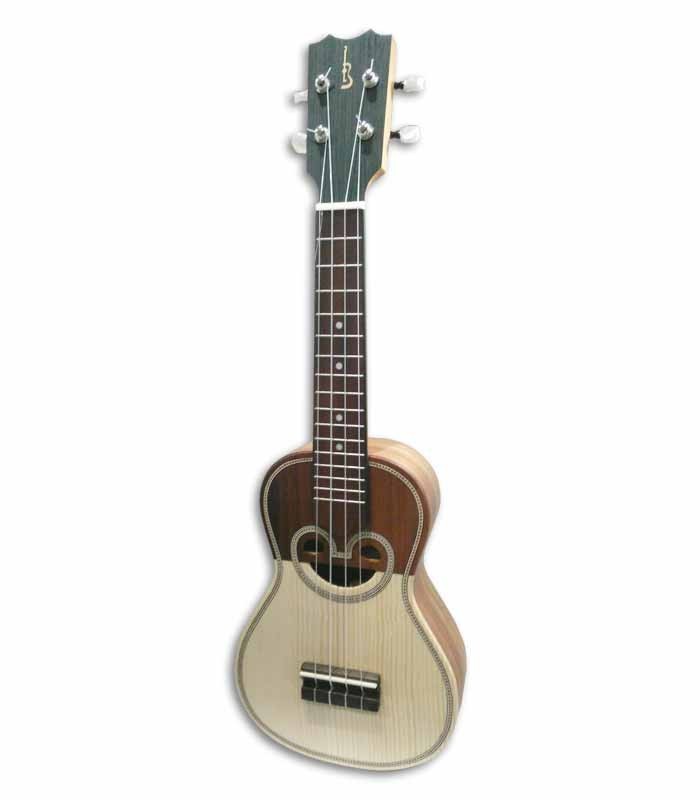 The new APC ukuleles have a body similar to that of the cavaquinhos. This model SS103 has ray soundhole and half tops, in spruce and black African wood. The bottom and the sides are in walnut.

The APC SS103 is a ukulele in the shape of a cavaquinho, returning to the origins of this traditional Hawaiian instrument.

The ukulele is an illustrious descendant of the cavaquinho, and APC wanted to honor these origins with the SS103, a soprano ukulele designed with the traditional shape and motifs of the Minho cavaquinhos.

Crossing these traditions, the APC SS103 is a quality instrument, with two half-tops of contrasting shades, half in light fir wood and the other half in black African wood. The tropical touch is given by the solid koa, a wood from the Hawaiian islands and raw material from the original ukuleles, from which the bottom and sides are made.

In the middle of the tops, we find a streak-shaped mouth, typically Portuguese and very characteristic of the traditional instruments of the North of Portugal, accompanied by a decorative line in the same pattern that enhances the shape of the body of this instrument, a traditional appearance capable of surprising the more distracted in the first chords.

The neck is made of black African wood with an on-board scale of 16 frets. The APC SS103 does not sound like a cavaquinho but like a ukulele, making the most of the acoustic potential of the ukulele format in conjunction with the typical cavaquinho characteristics.

The ukulele is a direct descendant of the Portuguese cavaquinho, taken by Portuguese sailors to the American Pacific islands to cheer up the crews during their long sea voyages, having found a new home among the natives of Hawaii.

It became a very popular instrument in the early decades of the twentieth century, when Hawaiian-inspired music filled the early days of radio in the United States, and it kept American soldiers in the trenches of World War II. Nowadays, it is one of the most popular instruments worldwide because it is easy to learn and very fun to play, in addition to being very portable.

The APC SS103 is a soprano ukulele with an immense responsibility but one that it manages to respect, brilliantly representing two popular traditions so distant but so linked to each other by history. Made in Portugal by APC.

Have the best of two traditions in one instrument with the APC SS103.